An ambitious scheme to provide fresh water to Launceston was begun in 1836. The original plan was to tunnel from the South Esk down stream from "Riverview", at Evandale, then flow through open channels, following the contour lines into Launceston, ending on top of Windmill Hill. From there, water was to be gravity fed to homes in the valley.

The first tunnel was abandoned after progressing 150yards, (137m). Another tunnel was started, closer to the village but this too was abandoned when in 1837 costs for the scheme prompted the Legislative Council to levy a water rate on households in Launceston in an effort to recover compensation costs.

Public outrage ensued, as no such rate was levied on the existing Hobart and New Norfolk water schemes. A committee was formed to fight the proposal on the ‘no taxation without representation` principal. This represented the first attempt to gain municipal self-government in Launceston. Eventually the scheme was abandoned and convicts were removed to work on the roads etc.

A Diorama with a 2 minute commentary depicting this scheme has been completed as part of the Evandale History Society displays. A 45minute DVD is also available for viewing. 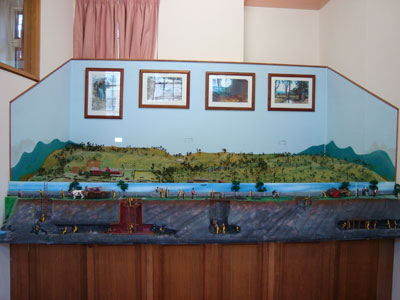