The Murray Memorial Room at the Evandale Community Centre was established to commemorate the life and deeds of Henry William Murray, VC, CMG, DSO & Bar, DCM, Croix de Guerre, the most highly decorated infantry soldier in the First World War.

The room contains copies of Murray's official records, photographs, personal letters and even a comic written about his heroic deeds. Later the contents were extended to record all known people from Evandale who served in any theatre of war.

Henry William Murray, or Harry as he was more commonly called was born at "Clairville", near Evandale on 1 December 1880. He was the eighth of nine children born to Edward Kennedy Murray and his wife Clarissa, nee Littler. Harry was baptised on 23 November 1885 and often used a combination of these dates as his birthday. Harry joined the Australian Field Artillery Militia in Launceston in 1902 and served until 1908. (Major Harrap, Commander). He gained valuable experience which was later to stand him in good stead.

Henry Murray was in West Australia when the First World War broke out. He enlisted for service on 30 September 1914.

After basic training, the 16th Battalion, ‘D' Company was transported to Melbourne where they embarked on the Troopship A40, Ceramic, on 22 December 1914.

Private Henry William Murray, No. 315, aged 35 years and almost 5 months, landed at Gallipoli on 15 April 1915. Regarding his first battle, Harry wrote, "I am cursed with a vivid imagination, and before going into battle I went through it all, had blood, brains, "innards", limbs etc., spattered all over me, and I fought my fight with self then, fixed my code, and it only remained to prove it. The real thing being less terrible than pictured, and an intense curiosity as to how I would react, got me through. The dominating factor was curiosity. "You see, I was a trained soldier, I put in 6 years as a youngster in the Launceston Artillery, a very strict standard of discipline and effectiveness was the code there." "My one wish before I landed was that I would not have to kill a man. This went at the sight of our dead and wounded".

During the next four years Murray moved through the ranks until, on 24 April 1918 he was promoted to Lieutenant Colonel. He had become the most highly decorated infantry soldier in the whole of the British Empire. His awards included: Victoria Cross, Companion of St. Michael and St. George, Distinguished Service Order and Bar, Distinguished Conduct Medal, Croix de Guerre, MID x 4.

"Harry Murray was known as ‘Mad Harry', but there was considerable method in his madness. No officer took more care to avoid losing men, and he took astonishing risks when personally reconnoitring, with the sole object of saving his men. A quick thinker in times of danger, he displayed extraordinary energy, resolution and courage." 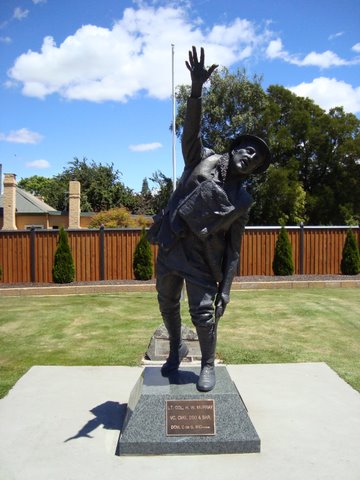