St. Mary's Catholic Church was built around 1863 reportedly by Mr. J. Calvin although accurate details are unknown due to lack of existing church records.

The church came under the parish authority of the Catholic Church at Longford.

The wooden church originally was built with a bell tower, which consequently collapsed due to rotten wood and was not replaced. St. Mary's at Evandale was the oldest wooden Catholic Church in the South Pacific to conducted regular masses.

The church was originally built with the doorway into the porch facing the side. This meant that coffins could not be carried into and out of the church. During 1976 when renovations took place, the original doorway was positioned to the front enabling funerals to be held.  In addition the foundations were strengthened.

On a Sunday in February 2001, saw the last regular Sunday Mass with the final Mass of Thanksgiving being held 10th November 2002.

In June 2003 the now deconsecrated St. Mary's Church was offered for sale and was eventually brought on the 20th July 2003 by Mr. Ian Hodgkinson for renovation to a family home. 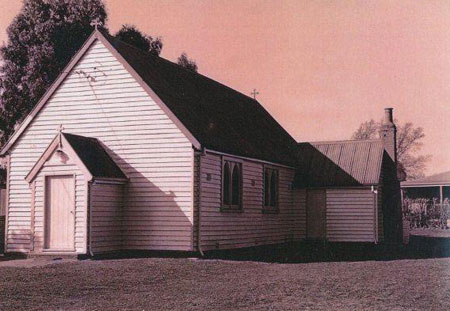