The Village of Lymington, later re-named The Nile was established by local landowners James Cox of "Clarendon" and Donald Cameron of "Fordon" to house their Workers.

The Village is believed to have been named by James Cox, after the seaport town in Hampshire. It was renamed "Lymington North" to avoid confusion with "Lymington" near Port Cygnet, and in 1910 was renamed again, this time becoming "The Nile", no doubt because of the continued confusion, it has been suggested.

The Church Building was originally used as a "School on Weekdays and a Chapel on Sundays". The Building was erected by James Cox (1790-1866) and stands on three acres of land also given by him.

Thomas Arnold, the Inspector of Schools, visited the establishment on 30th June 1853, when it was apparently newly built and reported that the premises were sufficient for the nineteen children who attended, but that the supply of books was poor and the teaching indifferent. The discipline was good and the children were neat and clean. Fees of 2/6 ( 2 shillings and 6 pence) weekly were paid to the Master, a Johnson, who was a retired Colour Sergeant of moderate attainments. Johnson attended school there day a week, possibly to teach needlework. Arnold's chief complaint was that there was no kitchen or toilet.

In 1869 the Local Schools Board visited the school and reported that there were forty four children enrolled but only thirty nine in attendance being eighteen boys and twenty one girls.

One Member of the Board,  John Whitehead, reported that he had visited a family by the name of "Green" living on  Robotham's Farm, more than three miles distant from the Public School. They had six children of which three were old enough to go to school and the parents were willing to pay 1/- (1 shilling) per week for their School Fees.

Other families were also having difficulties paying the school fees and it was decided that one of  Turner's children be also admitted on a "Free Certificate", with the other two (2) of his children being sent to school and the required "Fees Paid". One child of Henry Lodge was to be admitted on a "Free Certificate" for one School Quarter only, whilst another child from the Family to be sent, was to have the required "Fees Paid".

On payment of the required fees for two children by Larcombe any other from that family fit to go to school would be sent on a "Free Certificate".

One of Drake's children was to be admitted on a "Free Certificate" upon the payment for another two children attending.

The Teacher, Light, reported that several families "whose children ought to attend school" did not so attend along with the family names of Boyd, Griffith, Gibson and Sutton.

The Building continued to be used until late in the century at which time the Education Department erected a new school.

Early in 1893 the work of renovating the building commenced with Alexander North was the Architect and J.T. Farmilo the Contractor.

The addition of a Chancel Vestry and Tower were paid for from an endowment left by James Cox.

On St Peter's Day that year the building was consecrated by Bishop Montgomery.

James Cox is commemorated by "A Tablet in the Nave". 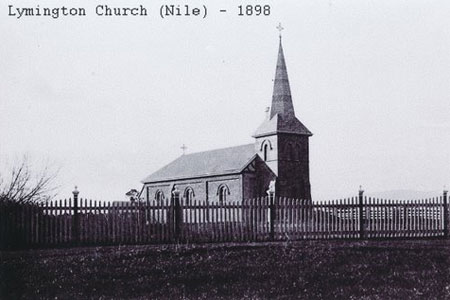