In 1834, plans were finalised and St. Andrew's Church of England was officially opened in 1837 by the Governor of Van Diemen's Land, Sir John Franklin.  The building was used as a place of worship on Sundays and a school room during the week days. The new building was constructed with bricks which were obtained from the abandoned works of the Evandale-Launceston Water Tunnel. In addition the roof was covered in shingle.

There were two rooms, the chapel/school room and the master's room. The building was situated at the end of Church Lane in what is now the back of the Rectory. The initial building was later used as a Sunday School before being demolished around 1910.

In October 1838, a larger Church of England was required with a petition requesting the Government assist in the erection of a more suitable building. Consequently work began on a new church in 1841. It was a red brick building with a square tower and the building was completed about 1844.

In 1869, discovery of large cracks were discovered which was caused by faulty foundations, and the church was finally demolished in 1871. The foundation stone for the present church was laid down on 30 November 1871 and building commenced using many of the original bricks. In May 17, 1872 the new church was consecrated and dedicated to St. Andrew. 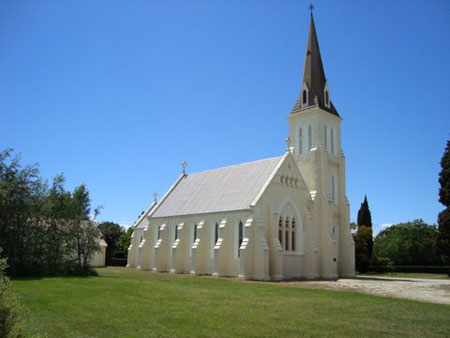